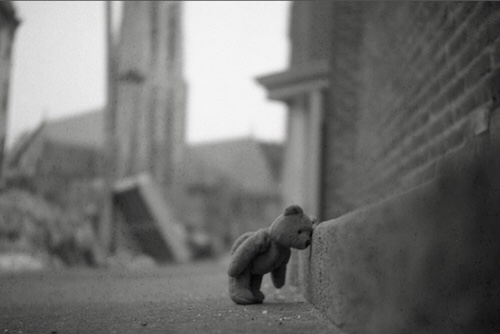 “The Unseen Scars of Being Bullied” by Pastor Randy

Today’s post is a little longer and deals with a difficult subject for many but my hope is that if you have dealt with abuse, bullying, or poor self-image, that you will take comfort in the fact that (1) You are not alone and (2) Even old wounds can heal with the help of Christ.

Hi. My name is Randy. I am 47 yrs. old and I have the receding hairline and protruding waistline to prove it. I have been happily married for 22 yrs. and am a proud father of four. I have spent early 3 decades ministering to others in churches, in community, online, and around the world, I have several degrees and have accomplished many things which you might think would help one’s self-esteem and yet, on a fairly regular basis, I find myself feeling inadequate and more often than not unable to see myself through any other eyes than those who bullied and abused me as a child. I find myself wanting to walk by faith and yet I feel more like a failure and a fraud in spite of the apparent fruit of my actions.

I mention Gideon briefly in a post last week and want to highlight him again here. He was a man who succeeded in spite of his somewhat lackluster faith, as seen by his testing of the fleece, and one of the things that often sticks out to me is how God addresses him during their first encounter when he appeared and said, “The Lord is with you, mighty warrior.” (Judges 6:12b) The reason why I find this so interesting is because how God views Gideon seems the polar opposite of how Gideon sees himself. Later, when God wants him to step up and He tells him to go up against the Midianites and save Israel Gideon’s reply is, “How can I save Israel? My clan is the weakest in Manasseh, and I am the least in my family.” (Judges 6:15b)

Isn’t it amazing how differently we can see ourselves compared to what God sees? We often focus on our past failures while God focuses on our future potential. We need to start seeing ourselves through His eyes.

Easier said than done though. I mean, I get why Gideon had a hard time seeing what God saw in him. Just as God called him a Mighty Warrior long before he lived up to that title others had probably called him other things that had already shaped his own identity and caused him to focus on what he couldn’t do and would never become. I get it.

As I stated earlier I am nearing 50 and have received and acted upon God’s call on my life for almost three decades now but, no matter how many times God addresses me as Pastor, or Leader, or Evangelist, I immediately find myself feeling like I’m back in the body of my 8 year old self; listening to my father explain why he never wanted me and that being a dad again was not worth it, or when I was 10 just waiting to get off the bus so that I could burst into tears over the hurtful words heaped onto me without further humiliation, or beginning middle school and realizing that even though it was supposed to be a fresh start that I was still the odd man out (no thanks to my speech problems or alternative sense of style), or trying to find any excuse to avoid the rest room (or school all together) because of the constant array of verbal, emotional, and physical attacks that I had to endure on a daily basis.

I get why, when God called Gideon “Mighty Warrior” that, he countered with the excuse that he was “the weakest man from the weakest clan”. I get why when God called Moses (a murderer who had gone AWOL) to set the slaves free his initial response was, “Who am I that I should go to Pharaoh and bring the Israelites out of Egypt?” (Exodus 3:11b). I get why when God called Jeremiah saying, “Before I formed you in the womb I knew you, before you were born I set you apart; I appointed you as a prophet to the nations.” (Jeremiah 1:5) his initial response was, “Alas, Sovereign Lord, I do not know how to speak; I am too young.” (Jeremiah 1:6)

The emotional scars that are carried from a tormented childhood may not be visible in the same sense as other physical wounds that have since healed yet they are often the hardest to overcome because the wound has not healed; it has cut too deep; down to the core of a person’s very identity.

People often wonder about my fascination with Batman but why wouldn’t I relate to a boy who had his childhood torn away from him because of the ruthless actions of others and, rather than dwelling in that feeling of helplessness, took control of the situation and chose to become a symbol and to stand up for those who couldn’t stand up for themselves. The irony is that even in becoming “The Batman” Bruce Wayne was still just a scared little boy trying to overcome his fears by becoming fear itself to those who would prey on the weak. I get it.

I AM a pastor. I AM a leader. I AM a husband. I AM a father. But I am also that wounded young boy that longs to be accepted, affirmed, acknowledged, and appreciated—not because of what I have done but simply because of who I am, who I was created to be, and who I am still called to be.

The scars are still there but the healing has definitely begun. Thanks to The Lord names like “Mighty Warrior” and “Pastor” seem more suitable than weakest or worthless. The struggle is still there and I pray to The Lord constantly to erase my old identity from my heart and mind but, like Paul and his thorn, I have come to the place where I hear God saying, “My grace is sufficient for you, for my power is made perfect in weakness.” Therefore I will boast all the more gladly about my weaknesses, so that Christ’s power may rest on me. That is why, for Christ’s sake, I delight in weaknesses, in insults, in hardships, in persecutions, in difficulties. For when I am weak, then I am strong. (2 Corinthians 12:9b,10)

And if you are reading this today and can relate I just want you to know that, no matter what anyone else says…

YOU ARE VALUABLE to God and others.

YOU ARE FORGIVEN if you confess you sins to Gods and no longer need to feel guilt or shame.

YOU ARE SAVED if you confess Jesus Christ as Lord and believe that God raised him from the dead.

YOU ARE REDEEMED! A CHILD OF GOD!! AN EQUAL HEIR TO THE THRONE!!!

I am an Evangelist with the Free Methodist Church and the Founder and President of Go Scatter Ministries. View all posts by Randy LeBaron